Mike Kochelin is the son in law of my neighbor Carol. I have known him and his family for about 15 years.  He is an avid wildlife photographer, and a recently retired engineer.  He is very much an advocate of all forms of wildlife but he especially loves birds.

A few years back he helped me rescue a swan with fishing line in his neck.  Thanksgiving night we were together having a drink and he asked what he could do to help Cape Wildlife Center and I kiddingly suggested he buy the facility and run it. 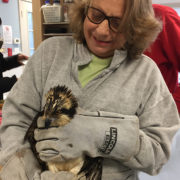 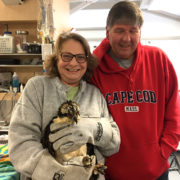 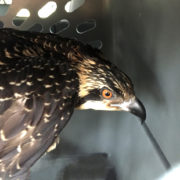 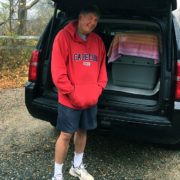 He wasn’t ready to do that and asked if there was anything else he could do to help.  I told him we needed to get an osprey, whose nest hit power lines and caught on fire, to Florida ASAP as the weather was getting too cold up here and it needed further rehabilitation.  He volunteered to drive it there nonstop.  The next day I checked with him again when neither of us was drinking, and he was still willing and excited to do this.

Cape Wildlife’s Center Dr. Lynn Miller cleared it with HSUS and plans were set in motion for the transport.  Mike rented a brand new suburban for the trip, while we prepared the bird for travel.  The morning of the trip the osprey was fed well, given subcutaneous fluids, and nestled in his deluxe carrier.  Mike took along some capelin in case of hunger, set his GPS and headed south. 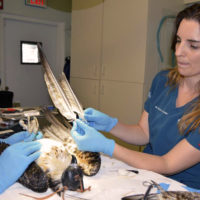 While at South Florida Wildlife Center, the osprey recently underwent an imping procedure. SFWC’s Dr. Renata Schneider performed the imping, in which the osprey’s damaged feathers were repaired by carefully matching and attaching feathers which came from another bird of the same species. This gave the recovering osprey the feather structure he needed to fly well as his new feathers grow in. The surgery was a success.

On February 4th the osprey was set free.

Release into the Wild was Otter this World