Blog
You are here: Home1 / Blog2 / Animal Rescue3 / Release into the Wild was Otter this World

WELLFLEET – A pair of orphaned North American river otters were released on Friday at the Herring River tidal gate on Chequessett Neck Road after being cared for and raised by volunteers at the Cape Wildlife Center in Barnstable. “The release was so joyful,” Cape Wildlife Center Director Lynn Miller said on Tuesday. “Watching them recover from orphanage and grow healthy and strong is very rewarding. We were pretty confident they were going to be OK. It was time for them to head out on their own.” 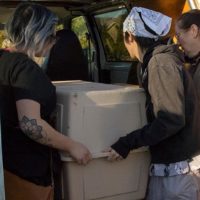 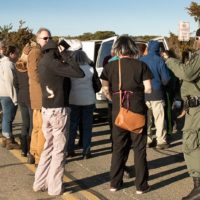 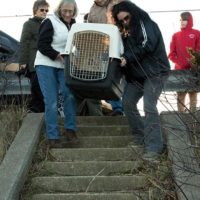 The seven-week old male was found at Constable Beach in Harwich, and the female was found at an unknown location in Carver. Both were brought to the center in May 2016. “Mum was no longer available,” Miller said about the pups. “The most likely scenario was that mum was out foraging and was killed. It could have been from anything.” The pups were not related, and each was brought in with siblings, but only the two survived. “That’s the sad part about what we do [at Cape Wildlife]. We see animals not the in the greatest of shape, so it can be really hard on everybody. But we do this because we care,” Miller said. “We brought them in and made sure they were getting everything they needed in terms of a balanced diet.” The otters needed to reach a mature weight – at 28 lbs. for the male and 21 lbs. for the female they qualified for release. Even though they weren’t siblings, they formed a close bond, and Miller thinks they will stay together now that they’re free.

Getting the otters prepped for transport to Wellfleet was no easy task. “They thought it was a great game,” Miller said, laughing that it was like playing chase. “The female was a bit timid, but the male thought it was some sort of game and he was winning. It was very entertaining.”

Otters are carnivorous mammals that typically weigh between 11 and 31 lbs., and are part of the Mustelidae family, which include weasels, ferrets, badgers and minks. They are highly curious and intelligent animals, which Miller said can sometimes lead to their downfall. “Their curiosity can lead them into dangerous situations, but it’s a natural behavior,” she said, adding that many otters are killed while exploring and crossing terrains. “Cars are the number one cause [of death]. Humans have a huge impact on animals. We are the basis of mortalities. Ninety to 95 percent of the animals we receive (injured) are because of human interaction.” 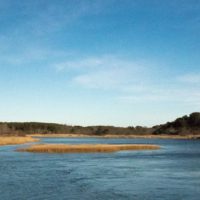 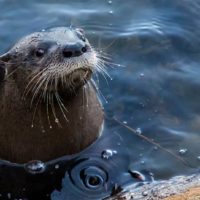 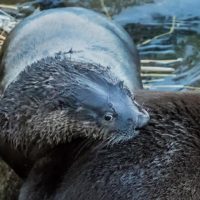 It is unclear what the otter population is on Cape Cod, but Miller and other animal advocates say there are quite a few swimming and playing in our waters. “Otters are all over Cape Cod,” said tracking expert Diane Boretos from Call of the Wild Environmental Services. “If people are around [the animals] usually don’t expose themselves. They’re a bit shy. But I’ve watched them run up and down river banks. They have wonderful personalities.” Boretos said that you can tell if an otter is in the area because of what she calls “otter-runs.” “Their feet are so short and their bellies rub on the ground making an indent,” she said. “They are mainly aquatic animals, but they will travel great distances inland to look for mates, food or other areas to inhabit.” Miller agreed. “Otters are very playful,” she said. “They especially love the snow. If you come across a slicked down area in a channel it could quite possibly be otters. Usually, you will only see them at the right place at the right time.”

Miller said many factors played a role in deciding where the otters would be released. “I was looking for a site where there was very little chance they would need to cross roads, not too many houses nearby, plenty of food, good weather conditions and lots of wild areas they could integrate into,” she said. “I wanted to give them an opportunity to find their feet, literally, and integrate naturally back into the system.” With the help of 25 volunteers and the assistance of Environment Police Sgt. Kevin Clayton the two otters were released successfully. “I knew as soon as they got in the water they felt liberated. It was really cute,” said Miller. “The thing that was the icing on the cake for me was as we left we stopped and watched them. The male had found something to eat. The fact that he was eating right away, well, that was a biggie for me. I felt confident these animals would transition just fine.”