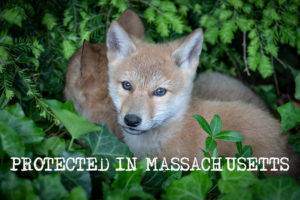 Hyannis-based retailer Powderhorn Outfitters launched its first coyote killing contest on the Cape in January 2018. The second annual contest ended on March 10 of this year. These two contests awarded cash prizes to hunters who brought in the largest coyote and the most cumulative weight. Raffle tickets were also awarded for each coyote weighed in at the store. In both contests, protesters bearing signs expressing their condemnation of the competition lined the road outside the store.

After hearing the public outcry on the issue, Sen. Julian Cyr, D-Truro, along with state Rep. Sarah Peake, D-Provincetown, and others in the Cape delegation were able to bring the issue to the state Division of Fisheries and Wildlife.

A coalition of leading wildlife protection organizations joined Cyr and Peake in a two-year crusade to ban wildlife killing contests in the Commonwealth; their efforts were realized on December 18, 2019 when  MassWildlife staff and the Massachusetts Fisheries and Wildlife Board voted to ban the killings.

This brings an end to events like those sponsored by Powderhorn Outfitters in which participants competed to kill the largest, smallest, or the greatest number of animals for cash and prizes. Winners of wildlife killing contests often proudly post photos and videos on social media that show them posing with piles of dead animals, often before disposing of the animals in “carcass dumps,” away from the public eye.

Wildlife agencies and professionals across the country have expressed concerns about killing contests not only because they reflect badly on responsible sportsmen and sportswomen, but because they also contravene modern, science-based wildlife management principles.

“This is a terrific example of constituents engaging with state government and challenging us to do better,” Cyr said. “I’m glad to see action was taken,” Cyr said of the new regulations. “We were able to end these wildlife killing contests in the Commonwealth and make sure that we have scientific based wildlife management.”

In 2018, more than 70 renowned conservation scientists issued a statement citing peer-reviewed science that refutes claims that indiscriminately killing coyotes permanently limits coyote populations, increases the number of deer or other game species for hunters, or reduces conflicts with humans, pets or livestock.

In fact, by disrupting coyote pack structure, randomly shooting coyotes may increase their populations and lead to more conflicts. Nonlethal, preventive measures are most effective at reducing conflicts with wildlife.

Wildlife Killing Is Destructive to Ecosystems

Wildlife killing contests are also destructive to healthy ecosystems, within which all wildlife species play a crucial role. Coyotes and foxes in particular provide a range of ecosystem benefits, including controlling rabbit and rodent populations and restricting rodent- and tick-borne disease transmission.

In just the past five years, California, Vermont, New Mexico and Arizona have taken a stand against cruel, unsporting and wasteful wildlife killing contests. California banned the awarding of prizes for killing furbearing and nongame mammals in 2014; New Mexico and Vermont outlawed coyote killing contests in 2019 and 2018, respectively; and Arizona prohibited the events for predatory and furbearing species this year.

Coyotes are still legally slaughtered for sport on Cape Cod

While we add this new measure of protection for Cape Coyotes, our reveling is tempered knowing this decision has done nothing to change the Coyote hunting season length, methods used and unlimited bag limits per hunter.

“Wildlife, especially the Coyote, living on Cape Cod are constantly struggling to survive in extreme conditions.  Any semblance to living a peaceful existence is destroyed by a 6 month daily free for all killing season using any caliber desired, up until midnight. Case in point, the Coyote; a Wiley and Magnificent apex predator, Steward of the Capes ecosystem, has been the brunt of unimaginable atrocities. The killings and torturous practices inflicted by hunters as legal, will continue until the Coyote is granted full protection. This holiday season I humbly pray we bestows the gift of life to the coyote, a life void of terror, a life to raise and nurture their young, to let them live and thrive among the beauty and splendor that Cape Cod has to offer. Let us ensure the coyote will not only be here for our future generation but also for theirs. Today’s generation will determine the fate of the coyote, I pray we don’t let it be too late.”