PROVINCETOWN — It’s baby-boom time for wildlife on the Cape and people need to understand how to coexist with compassion.

That’s why Friends of Cape Wildlife will present “Why Wildlife Matters,” with Kathy Zagzebski, of the National Marine Life Center in Bourne, and Stephanie Ellis, of Wild Care in Eastham, on Wednesday, May 23 at Napi’s Restaurant in Provincetown.

“It is our responsibility to rectify our human impact,” said Ellis, executive director of Wild Care, which cares for sick and injured small wildlife. “There’s not really any such thing as nature taking its course. It’s trying to take its course, but we are in the way.”

Human interaction causes almost half of the injuries to animals brought to Wild Care, Ellis said.

“We received 17,016 animals this year,” she said. “It was a huge year — almost 400 more than the previous year. Of those, 47.44 percent were affected negatively by people, by direct and indirect actions.”

Some are hit by cars or run over by lawn mowers. Hawks and owls get poisoned by rodenticides, and baby birds suffer when people chop down trees, she said.

Wild Care rehabilitates birds, mice, squirrels and opossums, but not foxes, she said.

“Our facility is very small and unfortunately we aren’t able to accommodate large animals,” Ellis said. “This includes foxes, coyotes, and raccoons. If it’s kits, and people think they’re orphaned, we will go out and assess and see if we can do a reunion, and if it doesn’t work out we transfer them to the Cape Wildlife Center.”

They are busy enough with small animals. 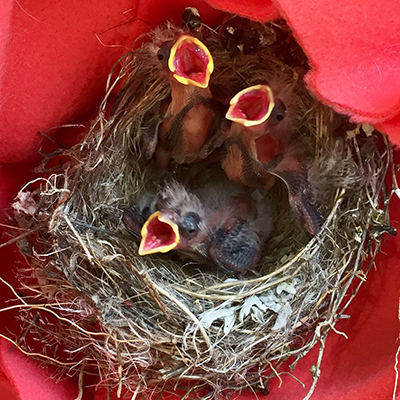 “We have over 50 baby squirrels right now, both Eastern gray squirrels and red squirrels,” she said. “That’s a lot of babies. Baby squirrels eat every two to four hours depending on age and condition. My staff take their time. They were there until after 10:30 last night feeding squirrels.”In addition to feeding squirrels, Ellis has been on baby mouse patrol the past few weeks. She got a call last week from Head of the Meadow Beach in Truro. Someone had found a baby mouse in the parking lot.

“It was pouring rain,” Ellis said while bottle-feeding a rescued mouse. “Its eyes were closed, it weighed four grams and the front paws were burned. It’s hard to say how it happened, but mice like to make nests in car engines. That would be my guess. We put little burn mitts on her front feet and put her on antibiotics and she’s looking amazing. Her little toes are going to drop off, but she’s making a full recovery and we are assessing her for release. It’s a fascinating example of what we do with the tiniest patients.”

“The reason we usually get baby birds is because people cut down and trim trees,” she said. “I always recommend late fall or winter, so that you don’t displace wildlife. House finches also love to nest on boats and get under the shrink wrap.”

Meanwhile, Zagzebski, who is president and executive director of the National Marine Life Center, is working to educate people on how to deal with aquatic life, specifically harbor seal pups, which she said are being born right now.

“Seal pups can show up anywhere on Cape Cod and they are small animals — less than 15 pounds,” Zagzebski said. “The biggest challenge is that the mom will leave them on the beach while she goes out to feed. That’s normal, until you put the pup on a crowded beach and people don’t leave the pup alone. We get a number of animals in our hospital that otherwise would have been fine. If you see a pup on the beach, leave it alone and give it a lot of space and keep dogs away. And let mom come back and get it.”