Blog
You are here: Home1 / Blog2 / Animal Rescue3 / How to Help a Snapping Turtle Cross the Road

While the Atlantic waters of Cape Cod might be infamous for one species of predator with frightful jaws, for pond-goers it is a run-in with the common snapping turtle that is generally met with shrieks. And while giving snapping turtles their space—whether at the pond, river, or marsh—is generally the rule of thumb, what happens when one tries to cross the road? Is it safe to help?

My dad (Kevin) ran into this situation several years ago while exploring the dirt/sand road between Great Hollow Beach and Corn Hill in Truro in his Toyota 4Runner. Today, this road is used for walking and biking and has obstructions on either end to discourage vehicles from entering.  At the time, Kevin was able to drive directly onto the path.

More than halfway down the road was an obstruction perched atop the crest in between divots created from years of tires compressing the sand. It was a creature as big as a dinner plate, with a ridged shell, beefy, wrinkly legs, a thick spiky tail, and a large head. For Kevin, turning around was impossible and backing up did not feel like an option. So he got out of the car and tried yelling at the snapping turtle as one might yell at a raccoon in their trash: “Hey! Get, get! Move it along!”

This did nothing to phase the snapping turtle, who was enjoying a nice sun bath. Kevin then decided to pick it up. Grasping the turtle with each hand on either side of its shell, Kevin lifted it a few inches above the ground. Hisss! The turtle stretched out its head, opened its mouth, writhed its limbs, and made a loud cat-like noise. Startled, Kevin dropped the turtle and swore.

Two bicyclists came by and offered no assistance. Kevin found a stick and pushed the turtle’s shell from behind. Again, the turtle squirmed all its limbs, stuck out its head and hissed. At this point, Kevin felt trapped. If the turtle wouldn’t move, how was he going to get down the road? 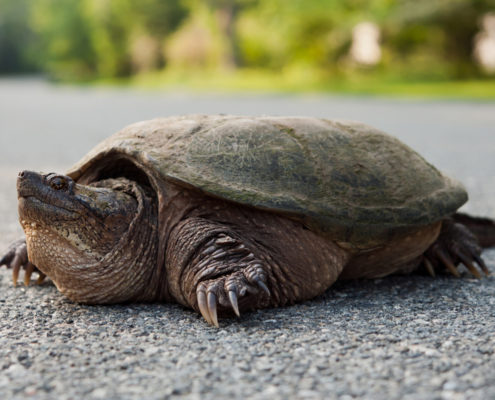 A common snapping turtle (Chelydra serpentina) rests in the middle of a road. The snapper is commonly seen crossing roadways near bodies of water that the turtles inhabit during the nesting season as the females look for a place to lay eggs.

“It’s just me and you!” He told the turtle. He proceeded to prod it with the stick. It was still agitated but began to slowly climb over the

crest it was sitting on towards the other side of the path. Kevin got the turtle to the point where he could swerve the car a bit to the other side and avoid hitting it.

Using a blunt object to prod the snapping turtle—like the stick Kevin used—is a safe way to encourage it across the road, according to the Turtle Rescue League. Never try to grab a turtle by the tail as that can damage it’s spine.

Worried about getting your finger bitten off? There’s a good chance that won’t happen on Cape Cod. The common snapping turtle’s relative, the alligator snapping turtle, is the one capable of such a feat. It is found in the southeastern region of the U.S. You are, however, still at risk of being bitten on the Cape, especially since the common snapping turtle can extend its neck as long as its body—up to 19 inches.

Caution is key. And if the turtle is in significant danger or injured and cannot be moved, you can always call the Friends of Cape Wildlife hotline: 508-375-3700.